In the simplest terms, cloud computing means storing and accessing data and programs over the Internet instead of your computer's hard drive. The cloud is just a metaphor for the Internet. It goes back to the days of flowcharts and presentations that would represent the gigantic server-farm infrastructure of the Internet as nothing but a puffy, white cumulonimbus cloud, accepting connections and doling out information as it floats.

What cloud computing is not about is your hard drive. When you store data on--or run programs from the hard drive, that's called local storage and computing. Everything you need is physically close to you, which means accessing your data is fast and easy (for that one computer, or others on the local network). Working off your hard drive is how the computer industry functioned for decades and some argue it's still superior to cloud computing, for reasons I'll explain shortly.

The cloud is also not about having a dedicated hardware server in residence. Storing data on a home or office network does not count as utilizing the cloud.

For it to be considered "cloud computing," you need to access your data or your programs over the Internet, or at the very least, have that data synchronized with other information over the Net. In a big business, you may know all there is to know about what's on the other side of the connection; as an individual user, you may never have any idea what kind of massive data-processing is happening on the other end. The end result is the same: with an online connection, cloud computing can be done anywhere, anytime.

Consumer vs. Business
Let's be clear here. We're talking about cloud computing as it impacts individual consumers—those of us who sit back at home or in small-to-medium offices and use the Internet on a regular basis.

There is an entirely different "cloud" when it comes to business. Some businesses choose to implement Software-as-a-Service (SaaS), where the business subscribes to an application it accesses over the Internet. (Think Salesforce.com.) There's also Platform-as-a-Service (PaaS), where a business can create its own custom applications for use by all in the company. And don't forget the mighty Infrastructure-as-a-Service (IaaS), where players like Amazon, Google, and Rackspace provide a backbone that can be "rented out" by other companies. (Think Netflix providing services to you because it's a customer of the cloud-services at Amazon.)

Of course, cloud computing is big business: McKinsey & Company, a global management consulting firm, claims that 80 percent of the large companies in North America that it's surveyed are either looking at using cloud services—or already have. The market is on its way to generating $100 billion a year.

For a great look at more examples of business services in the cloud, read our 20 Top Cloud Services for Small Business.

Shutting down regularly is the practical option, but it's not without its downsides. Let's take a look at the pros, cons, and what you can do to remedy the disadvantages. 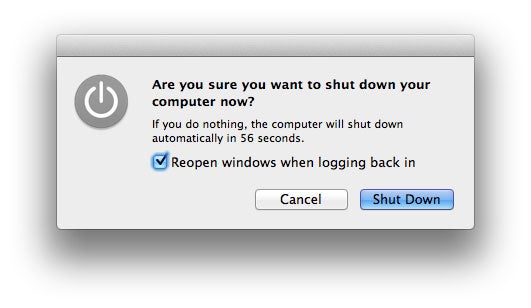 Keeping your computer powered on is the more convenient option. It offers a few distinct advantages that can save you a bit of time and frustration, but also has a few major downsides of its own.

Backed up your data?

A complete system backup, such as a disk image, will help you recover quickly from a drive failure or other catastrophe, but it adds the expense of a second hard drive (or potentially extensive disc swapping if you use your optical drive). The best time to create a drive image is immediately after you reinstall Windows and get your applications running again. An image containing a patched copy of Windows and all your favorite programs configured the way you want them is a very useful thing to have at hand.